The Cumbre Vieja volcano erupted on 19 September in La Palma threw jets of lava and ash into the air. Large amounts of volcanic lava, ashes and gas – carbon dioxide (CO2), sulfur dioxide (SO2) and water steam (H2O) – were released during the eruption. The lava flow reached the sea 10 days after the eruption creating a marine delta formed around the shallow platform. On November 10th at 1:45 a.m. local time, a second lava flow reached the sea near the beach of Los Guirres.

In order to assess and monitor the impact of the volcano activity on the La Palma marine ecosystem, the EMSO Generic Instrument Module (EGIM) has been deployed a few days ago at about 2,5 km from the point in which the lava flow is entering the Atlantic Ocean. The module was laid down on the seabed at a depth of about 500 m in an area with a relatively slower slope. The expedition was coordinated by The Oceanic Platform of the Canary Islands (PLOCAN) (https://www.plocan.eu/en/) and the Universitat Politècnica de Catalunya (UPC) (https://www.upc.edu/en) under the guidance of Dr. José Joaquín Hernández Brito, CEO of PLOCAN, with the technical assistance of Joaquin del Rio and the UPC team, and with the support of the EMSO ERIC DG, Juanjo Dañobeitia. 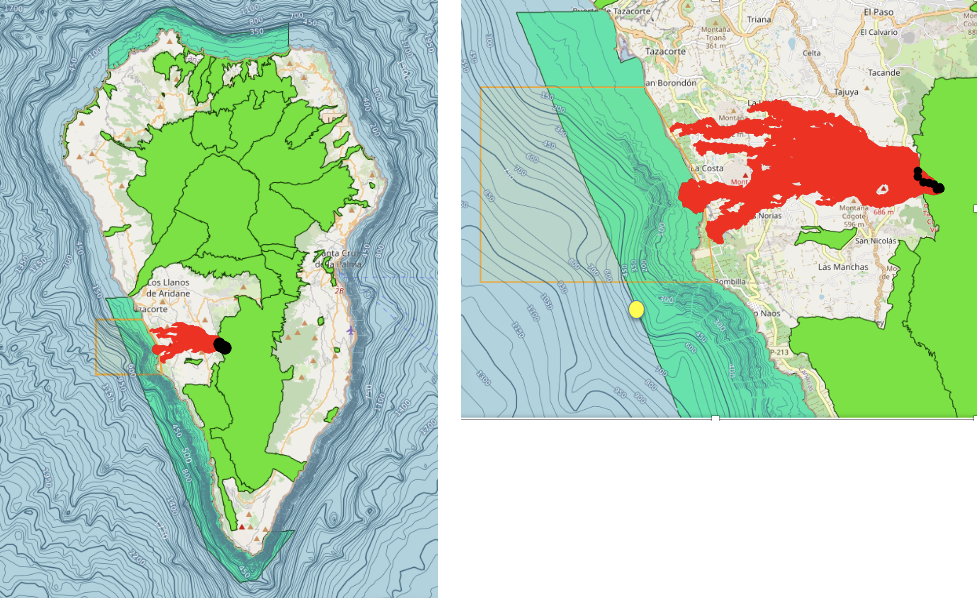 Figure 2 – The maps of La Palma Island. Location of the deployment of the EGIM in front of the lava flow (yellow dot). The volcano’s craters (black dots). The area affected by the lava (in red) and the Nature 2000 protected ecosystems (green areas). The orange square highlights the exclusion zone.

The EGIM has been developed during the European Project EMSODEV to ensure accurate, consistent, comparable, regional scale, long-term measurements of ocean parameters, which are key to addressing urgent societal and scientific challenges such as climate change, ocean ecosystem disturbance, and marine hazards.

The purpose of the expedition in La Palma is to monitor during the next three months a series of oceanographic variables in the area in front of the submerged Cumbre Vieja volcano, as well as tremors and acoustic biological variations to assess the influence of the active volcano and the lava flows on the environment.

The set of seven sensors the EGIM hosts will register in La Palma priceless time-series data of the following observables:

Specifically, the aim of the EGIM is to collect data for contributing to the characterization of the water mass variability in the area and monitoring the impact of the lava in the maritime zone, especially in the Special Conservation Area (ZEC) zone called “Franja Marina de Fuencaliente”, located in the south-southwest area of the island of La Palma. It covers an area of 7,055.25 hectares and bathes the coastline of the municipalities of Tazacorte, the Llanos de Aridane and Fuencaliente[1].

Data will be integrated with other platforms surveilling the area (e.g. wave gliders,  shorturl.at/klK34) to be used by the emergency authorities managing the crisis, research community and other users following the FAIR principles. At the moment, more than 200 researchers from national and international institutions are working on several aspects related to the volcanic eruption and their environmental and socioeconomic impact. Data provided by EGIM will also contribute to knowing more about cetacean communities around La Palma Island[2].

[1] This space has been declared since September 2011 as a Special Conservation Area (ZEC), a figure contained in the Natura 2000 Network whose purpose is to ensure the long-term survival of the most threatened species and natural habitats in Europe, helping to stop the loss of biodiversity caused by the adverse impact of human activities.
[2] Pérez-Vallazza, C., Álvarez-Vázquez, R., Cardona, L., Pintado, C., & Hernández-Brito, J. (2008). Cetacean diversity at the west coast of La Palma Island (Canary Islands). Journal of the Marine Biological Association of the United Kingdom, 88(6), 1289-1296.